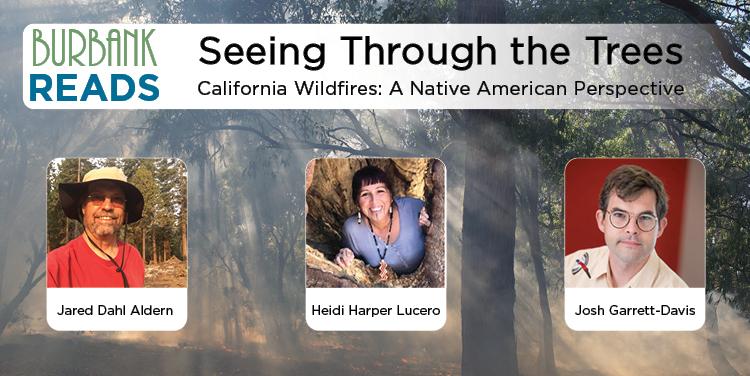 This event is part of Burbank Reads 2021 and presented with the cooperation of the Autry Museum of the American West and KCET. It will be presented on Zoom.

If you're interested but not able to attend the live webinar, go ahead and register. We'll send a link to the recording to all registrants after the fact.

Our main book selection for Burbank Reads, Braiding Sweetgrass, is about the practices used by Native Americans to create ecological sustainability, their care of the land. We will hear about the permanent exhibit the Autry has created on Indigenous ecological practices, and about the Autry’s garden of native California plants.

Our local KCET Public Television station (PBS) has produced the documentary TENDING THE WILD as well as TENDING NATURE, a series of programs created in collaboration with the Autry Museum of the American West. We are going to sample the documentary series by screening a portion of TENDING THE WILD called “Cultural Burning,” which is one of the tools used by Native Americans for sustaining the land and for limiting the destruction of wildfires--a topic of great current interest to all Californians.

A discussion of the importance of fire to Native culture and to the care of the land will follow the screening, with Heidi Harper Lucero, a culture bearer of the Ajachemen and Mutsun Ohlone Tribes, Jared Dahl Aldern, lead investigator and research associate with The West On Fire research and education initiative of the Huntington-USC Institute on California and the West, and Josh  Garrett-Davis, Gamble Associate Curator at the Autry.

Heidi Harper Lucero is an Indigenous anthropologist and a culture bearer for the Acjachemen and Mutsun Ohlone Tribes. She is an accomplished native artist and basketweaver; a teacher of traditional cultural knowledge, including the use of native foods to improve the health of native populations; and an activist fighting for the protection of sacred sites and the return of ancestors and sacred objects under the Native American Graves Protection and Repatriation Act (NAGPRA). She is the newly elected tribal chairwoman of the Juaneno Band of Mission Indians Acjachemen Nation.

Jared Dahl Aldern is an environmental historian and fire practitioner. Retired from educational and tribal government staff careers, he is a lead investigator and research associate with the West on Fire research and education initiative of the Huntington-USC Institute on California and the West and a co-founder of the Sierra-Sequoia Burn Cooperative.

Josh Garrett-Davis is the Gamble Associate Curator at the Autry Museum, where he helped curate the Human Nature exhibition about Native California and the environment. He served as an associate producer on KCET’s TENDING THE WILD. He is the author of a memoir, Ghost Dances: Proving Up on the Great Plains, and What Is a Western? Region, Genre, and Imagination.

Burbank Reads is a program inspired by the idea that the shared act of reading can bring a community together. Everyone is encouraged to read the same book and participate in discussion and learning surrounding the subject of this year's focus - sustainabilty. The main title for 2021 is  Braiding Sweetgrass: Indigenous Wisdom, Scientific Knowledge and the Teachings of Plants by Robin Wall Kimmerer. Find our Burbank Reads brochure here.